Rockfall is still a hazard on Mt. Shasta until we receive significant snow. Climbing is not recommended on select routes. Be sure to check the climbing advisory if you still choose to climb.

The avalanche danger on Mt Shasta's glaciers and all other areas hosting snow is LOW. Normal caution advised. Skiing on the glaciers at this time is rough and icy. Be cautious of open bergshrunds, crevasses, ice patches, and rock/ice fall. Self arrest may be difficult with current conditions. Always keep an eye and ear out for rock fall.

Other skiable areas (not many!) host variable snow textures. Normal caution advised. If you find yourself climbing or skiing one of the many skinny, snow-filled gullies...keep in mind that these gullies can host much more rockfall than open slopes as they act like a funnel for any loose rocks descending the mountain. IF you choose to climb, WEAR A HELMET PROPERLY - That is, fit snugly to your head with the front of the helmet directly over your eyebrow line. Further, know how to use your ice axe and crampons!

A photo of the mountain from town on February 1st. A trace to two inches of snow fell above 8,000 feet this past week giving Mt Shasta a nice, white veil. While it may look enticing from afar, check the photo from Horse Camp below (7,950 ft). Not much! 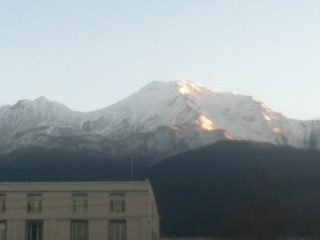 Since Monday the 27th, we've received .19 inches of water at our Old Ski Bowl weather station at 7,600 feet. High snow levels to start the week gave us some rain at times at Bunny Flat (6,950).Overall, no more than a skiff of new snow can be found above 6,500 feet on Mt Shasta. The snow level has generally been around 8,000 feet this past week. Temperatures have fallen and it feels a little more winter like, but I don't expect much more, if any, precipitation for the remaining weekend. 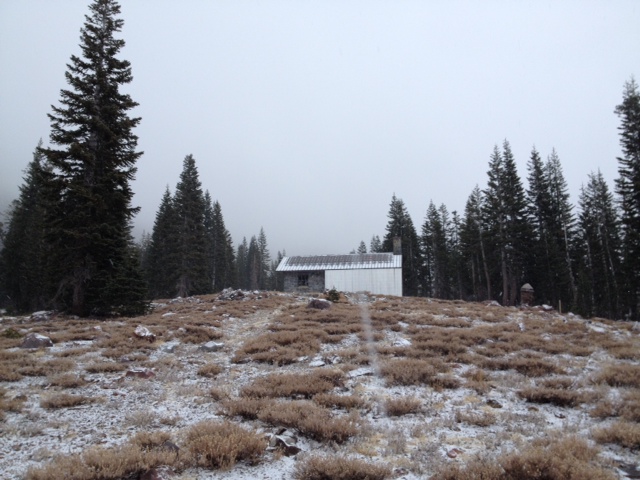 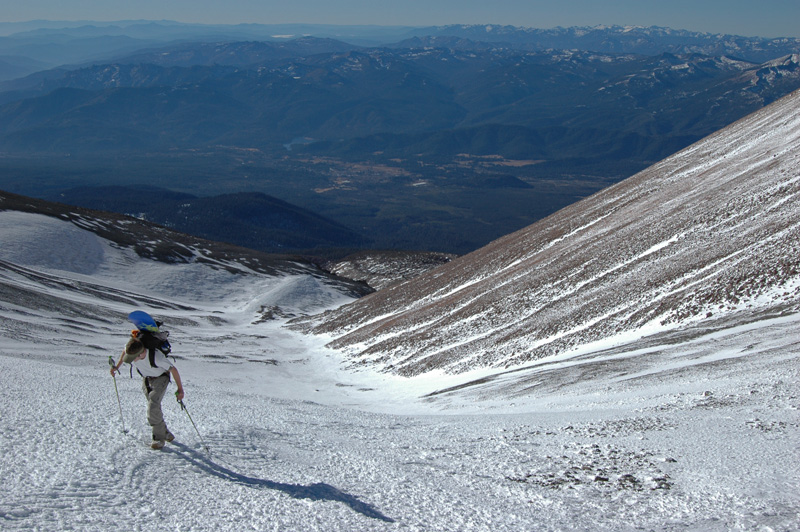 Some skiing to be had in Cascade Gulch! This photo taken a couple weeks ago. One must walk to upper Hidden Valley before skinning up. Photo: C. Carr

All trailheads are still accessible by vehicle. Be cautious of any overnight trips on the mountain with snow involved. Storms can easily dump large amounts of snow to the area and make it difficult to drive off the mountain! While Northgate, Brewer Ck and Clear Ck trailheads are officially closed, the bathrooms are still open with packout bags inside, and one can still access the Mt Shasta Wilderness. However, your summit pass and wilderness permits must be purchased at McCloud or Mt Shasta Ranger Stations. NO DOGS are allowed in the Mt Shasta Wilderness OR Sierra Club Property. Thanks!

Below are a few aerial pictures taken during the middle of December. Conditions look much the same currently, if not less snow. 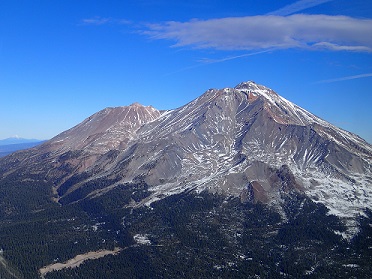 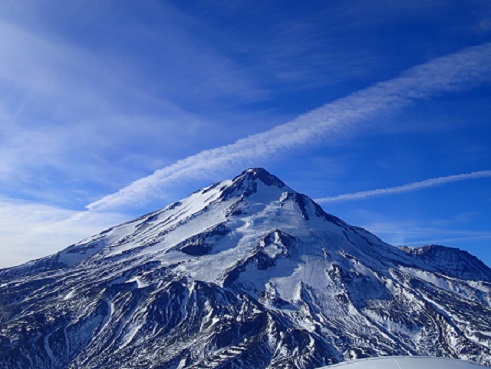 The North Side of Mt. Shasta with the Hotlam Glacier in center, Hotlam/Wintun ridge left, Shastina to the far right. Taken 12-18-13. (Photo: H Meyers) 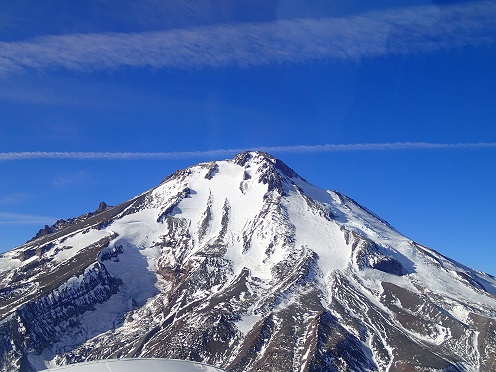 In Mt Shasta City this morning at 0500, we have clear skies and a current temperature of 19 F.

Old Ski Bowl - 7,600 feet, we've had a trace of new snow over the week with no new snow in the last 24 hours and a snow depth total of up to 5 inches at best in shaded pockets. The current temperature is 15F with a low of 15F and a high of 25F.

Castle Lake - 5,600 feet, the current temperature is 19F with a low of 18F and a high of 26F. Castle Lake has received no new snow with a current snowpack of 0-5 inches in more shaded areas.

Mt Eddy - 6,500 feet, the current temperature is 14F with a low of 14F and a high of 23F. Mt Eddy received a trace of new snow over the week, no new snow over night, and a current snow depth total of 0-5 inches. Winds have averaged 2 mph with gusts to 10 mph, southeast.

For now, more winter like temperatures will continue with a small chance of fleeting snow flurries for the remainder of the weekend. Classic northwest flow sets in on Monday and will bring moderate winds to the mountain and partly cloudy skies for the week. The low mentioned yesterday still seems to be tracking west toward the coast of California and then diving south, just brushing the west side. Coastal mountains and areas west of I-5 will likely be the focus of any possible precip, but still not expected to be much at all.

And to keep that carrot dangling infront of you slobbering, desperate winter rabbits (that includes me), I'll leave you with this from NWS Medford's, Mr. Lutz, which I love: SATURDAY FEBRUARY 8TH THROUGH MONDAY FEBRUARY 10TH NUMERICAL MODELS CONTINUE TO INDICATE A VERY INTERESTING SCENARIO. PROGRESSIVE FLOW ACROSS THE PACIFIC IS EXPECTED TO BUMP THE COLD DOME OVER THE AREA EASTWARD AS SUBTROPICAL PACIFIC MOISTURE ARRIVES. THIS COULD VERY WELL BRING A MAJOR STORM TO THE REGION AS GOOD MOISTURE MEETS COLD AIR IN PLACE. GIVEN THE RARITY OF SUCH AN OCCURRENCE OVER THE LAST 4 MONTHS, WE`LL GIVE ALL OF THIS TIME TO EVOLVE BEFORE CONJECTURING ANY FURTHER. BTL

"So your telling me there's a chance...": http://youtu.be/zMRrNY0pxfM

Have a great day!