Currently, the avalanche danger is LOW for all aspects and elevations.
Be careful of shallow buried objects!
Rockfall is still a hazard on Mt. Shasta. Climbing is not recommended on select routes. Be sure to check the climbing advisory if you still choose to climb.

Rain on snow and warm temperatures have consolidated the snowpack into a solid mass. Refreeze last night and this morning will keep things stable. Normal caution is advised.

I have not been able to make it to upper elevations (above 9,000 feet) but I think it is worth mentioning the fact that upper elevations on Shasta have been getting snow and strong winds over the past week. Winds have been S, SW, W and NW at times during the past week. If climbing or skiing on the upper mountain, expect wind loaded areas of new snow and wind slabs as a possibility.

We are seeing much cooler temperatures this morning and refreeze of the snowpack at all elevations.  This will take care of any wet slide concerns at this point. Rain on snow and warm temps in general have consolidated and settled the snow into a solid, stable mass. A .5cm rain crust was found near and above treeline yesterday with very wet snow below. Treeline and below, rain runnels dominate the snowpack with large pockets of water/slush. I would usually expect the water to percolate down into the ground, however we came across several of these deep slush/water collection areas in low lying depressions. Visibility was extremely poor yesterday, but I snapped a few photos of these water collection areas. Definitely a lot of water in the snowpack, obeying the laws of gravity and collecting in these areas.

As temperatures dropped yesterday, snow began to fall at Bunny Flat around 1400 and by the end of day it was coming down pretty good. The Old Ski Bowl recorded about .75 inches of water in the last 24 hours. New snow totals are likely about 2-4 inches for today, maybe a bit more in drifted areas. New snow wind slabs on top of the recently formed surface crust may create unstable conditions on steeper slopes (>35 degrees). Winds have been westerly in nature. 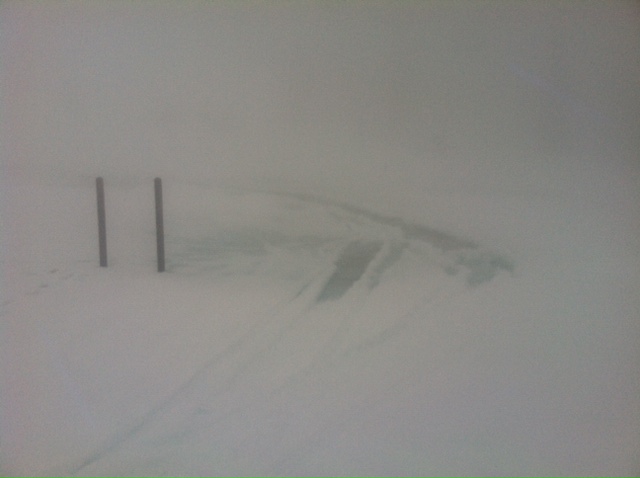 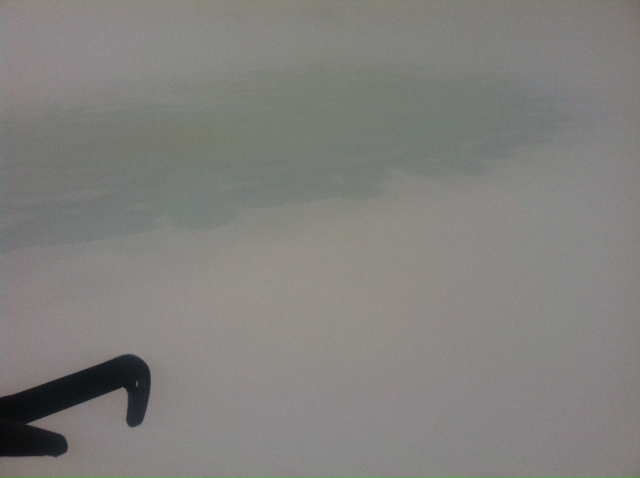 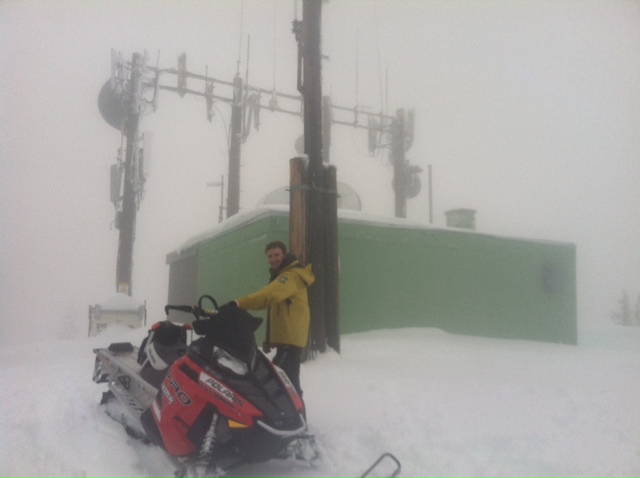 Paul Hart, OHV Coordinator for the Shasta/Trinity National Forest, helps with some weather station work and also breaking in the new snowmobiles the MSAC received through a state OHV snowmobile avalanche education grant. Paul has proved extremely helpful in acquiring and processing the grant. Thanks Paul !!

Yesterday was the warmest we've seen yet out of this past weeks storms with the low at Gray Butte (8,000 feet) of 33 F. Ouch! We got the precip, now we just need those temps to drop! Can't have your cake and eat it too, so they say. Needless to tell you all, rain on snow was the soup de jour yesterday and last night up to 8 - 8,500 feet. We received 1.21 inches of water over the last 24 hours. While I would be more concerned if we had a deeper snowpack, the rain has squished and melted our original 2 feet of snow into a beautiful mixture of classic Cascade Cement. Because of shallow snow depth totals and good anchoring, the avalanche danger will remain low for all areas below 8,500 feet. If we were to have any wet slide activity, I would think we would have already seen it.

As for the upper elevations on Shasta, I havn't been able to make it up there due to poor visibility. I'm guessing that above 8,500 to 9,000 feet has been getting snow and I am uncertain what things look like up there. As the weather clears later today and tomorrow, we will get a look at what kind of snow totals we received.

The pit profile below is still closely representative of our limited snowpack at this time. Castle Lake and Mt Eddy areas are almost free of snow due to rain.

We've had a mixed bag of rain and snow over the week with fluctuating snow levels. All elevations below Bunny Flat (6,950 ft) received mostly rain with some mixed snow and very wet.

I dug several pits yesterday in the Old Ski Bowl, and numerous aspects on Gray Butte. On average, Mt Shasta has received 17-20cm of new snow over the work week. Snow fell down to as low as 5,400 feet over the week, 2-4cm and wet. The most noticeable snow accumulation occured 7,000 feet and above.

View pit profile below. This profile is representative of much of what I saw yesterday in the snow above 7,000 feet. We have about 18-23cm of new snow on top of a 1cm crust. Bump down 18cm, and you will find another 1cm crust. Below this crust and taking us to the ground is older, 1 finger hardness snow. Due to rain on snow and fluctuating snow levels, the rain/moisture is seeping down through the top 18-23cm layer of new snow, hitting the first crust and slowly percolating into the snow layer in between the upper and lower crusts. This percolating water has completely saturated this mid 18cm of snow and is quite greasy in nature. It proved to be the weakest layer in the snowpack. I received test scores as follows: CT16/Q3 @ 32cm, CT12/Q3 @ 25cm, ECTN11@32cm.

We still have a shallow snowpack with good anchoring terrain (rocks, bushes, trees, forest debris) and this is likely the reason we are not seeing any slides on this wet layer. However, I'm not ruling it out that we could see a wet slide or two triggered in the coming days. It's important to remember that rain adds weight and not strength to the snowpack. As we receive more rain on snow and snow at times in the coming days, this could stress the snowpack to failure. Areas that are wide open, steeper than 35 degrees with several feet of snow could be suspect for wet slides. 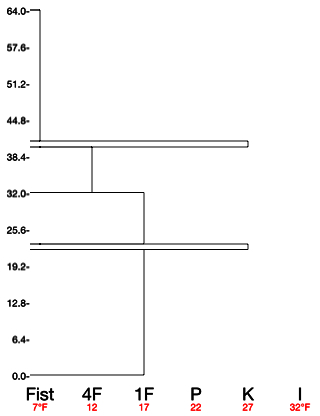 As always when our snowpack is shallow, watch out for objects that can cause injury near the surface of the snow.

In Mt Shasta City this morning at 0500, we have clear skies with a current temperature is 32 F.

Castle Lake - 5,600 feet, the current temperature is 24F with a low of 24F and a high of 38F. Castle Lake has received no new snow and only rain in the last 24 hours with a current snowpack of 0-2 inches.

We will get a short break in the weather today with some partly cloudy skies and cooler temperatures. While the next storm won't compare to this past weeks weather, we should still get more precip with lower snow levels Monday night. West/Northwest flow with this system will not provide a whole lot, but something is better than nothing at this point!