The avalanche danger is LOW for all aspects and elevations. Caution is advised if you find yourself on shady, northerly slopes >35 degrees hosting isolated wind/hard slabs on top of existing snow.
Climbers: ROCK & RIME ICE FALL will be a hazard this weekend. The snowpack is still shallow (1-3 feet) and a slip and fall on hard, firm snow without self arrest skills will likely prove disastrous.
Be sure to check the climbing advisory if you still choose to climb.

Mt Shasta has received .07 inches of water during this past weeks "storm", resulting in a couple inches of new snow above 6,900 feet on Shasta. Northwest winds blew for most of the week and peaked on Wednesday morning with gusts to 80mph. Much of our old snow is rock solid and wind scoured. However, leeward slopes, gullies, depressions, and lower lying areas (above treeline) host a mix of wind packed powder and harder wind slabs.  Yesterday, small wind slabs dotted the landscape above treeline. One should use caution when on wind slabs sitting on firm, old snow on steeper slopes (>35 degrees). Wind slabs will be small in size with isolated distribution. Triggering of said wind slabs is very unlikely, though not impossible.

Overall, it's a mix between hard, firm conditions, isolated wind slabs and pockets of powder. Southerly, sun affected slopes with decent coverage are moving toward melt/freeze and some decent corn skiing was found in Powder Bowl yesterday, mid afternoon. Powder Bowl is south facing and gets very good sun and is protected from northwest winds. 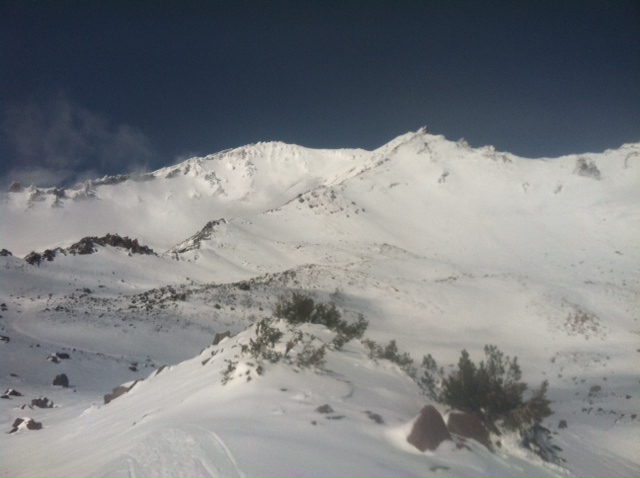 A look up into the Old Ski Bowl, with Casaval Ridge and the Trinity Chutes in background, and Green Butte Ridge slicing left to right up to Sargents Ridge.  [Photo: 2-21-14  N Meyers]

Northerly facing, cooler slopes are variable and host poor skiing. The old snow from weeks past is completely bombproof and difficult to penetrate with shovel, boot and even probe. Some areas of old snow has an icy sheen to it and is very, very slick. For climbers, a slip and fall on this smooth, icy snow could prove disastrous as self arrest would be difficult as many rocks still stick out of the snow like jagged teeth.  The wind slabs we found were 10 to 30 cm thick. About the bottom 2/3 of any given wind slab hosted partial faceting and in general, sugary snow sitting on the firm, old snow. The top 1/3 of the slab hosted sun/wind crusts 5 to 10 cm thick. While compression tests scores were low, bridging from crusts and only partially developed facets are keeping things intact at this point and full slab propagation is not likely with the current conditions. Our weather leading up to next weeks storms will dictate the development of these weak layers. We have potentially two up coming avalanche problems: new snow on top of wind slabs with underlying weak layers, and/or new snow on top of icy, old snow. At this point, triggering any avalanche activity will be difficult.  Overall, our pit was 120cm deep on the north facing aspect of Green Butte, one of the deepest areas we could find.

For now, snow conditions are still slim and shallow! Any recent pictures you might have seen of Shasta make it look like conditions are pretty good. I suppose it IS good considering our winter, however in reality, there is only about 1-3 feet of snow on the mountain. Many of the rocks are white and look covered, but this is rime ice and not snow. Anybody wishing to climb this weekend is cautioned: rock and rime ice fall will be a hazard, especially during the warmest portions of the day. A slip and fall on any existing frim and icy snow, as mentioned above, will likely prove disastrous if unable to self arrest.

Snow is melting and patchy below 6,000 feet and many shallow buried object exists below treeline. 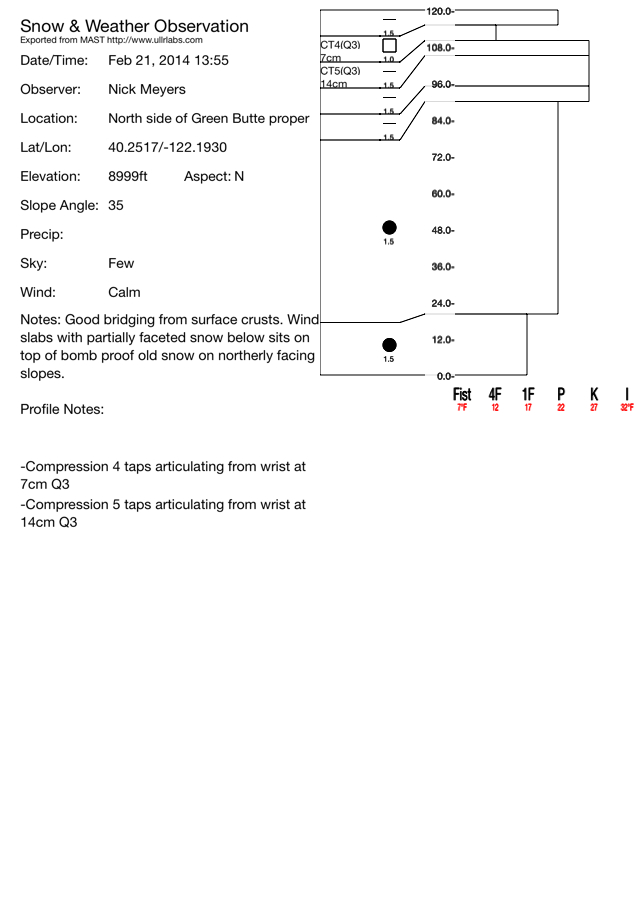 In Mt Shasta City this morning at 0500, we have clear skies with a current temperature is 31 F.

Mt Eddy - 6,500 feet, the current temperature is 31F with a low of 30F and a high of 43F. Mt Eddy has no new snow and a current snow depth total of 7 inches. Winds have averaged 3 mph with gusts to 7 mph, southerly in nature.

Another warm and sunny day today. The overnight low temps were slightly higher last night and today we can expect the daytime high to be a few degrees warmer than yesterday. Light winds today coming out of the West moving more Southwest as the day progress's. Tonight we have a 20-30 percent chance of some light precip ahead of the clouds moving in for Monday. Snow and rain are on their way starting as early as Wednesday and gaining strength through the weekend. The Freezing level is expected to drop down below bunny flat elevation on Tuesday so we should be seeing some of that rare white stuff we like to play on.