Up to 1.3 inches of water is expected from our current storm in progress with snow levels near 8,000 to 9,000 feet. Storm snow avalanches will be possible on upper elevation slopes, above the rain/snow level. We could see up to 8-10 inches of new snow with this storm at/near 10,000 feet.

New snow and southwesterly winds from todays storm will create conditions for wind slab avalanches on N, NE, E, SE, S aspects. Ridgetops and bowls on the upper mountain, above the rain/snow level, will be the best areas to find wind slabs. Slabs could be 6" to several feet deep.

Warm temperatures yesterday created areas of loose wet avalanches in the form of rollerballs and pinwheels on slopes steeper than 35 degrees. Overall however, good snow stability has been found on all aspects of the southern side of the mountain. Below 8,000 feet, lumpy, rain runneled snow with breakable crust in areas dominates due to high snow levels with the past few storms. Above treeline (8,000ft) the snow smooths out considerably and pretty darn good skiing has been enjoyed by folks over the past few days. Concern for avalanche activity in the next 24-48 hours will be rain on snow creating loose wet avalanche conditions below the rain/snow level, and storm/wind slab avalanches on the upper mountain. This danger will increase as the storm progresses today. 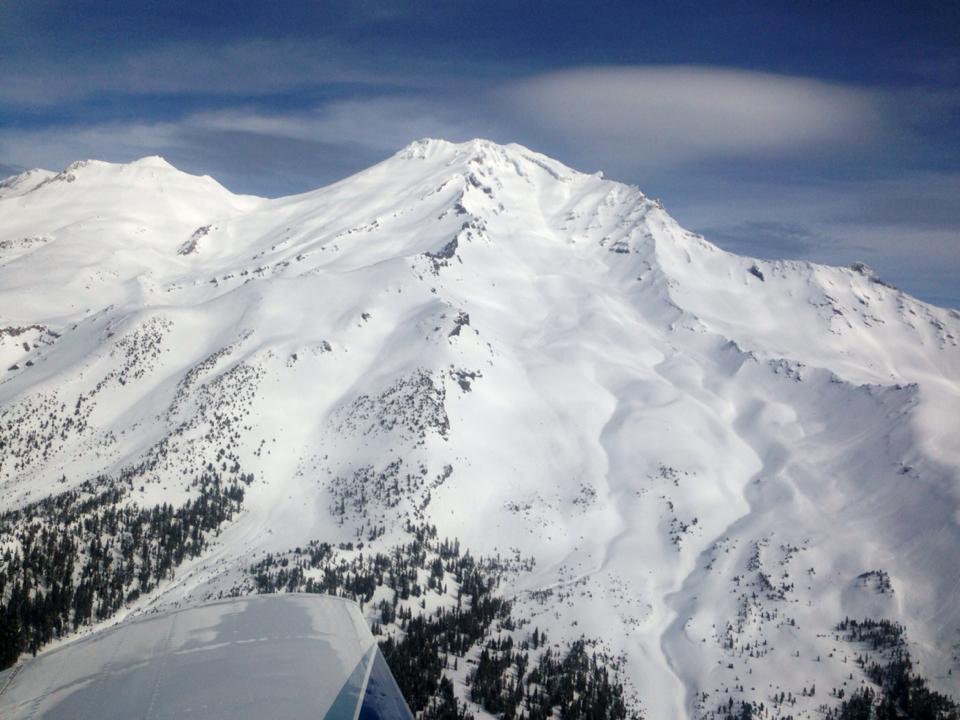 Overall good snow stability was found yesterday during a tour of Casaval Ridge and Avalanche Gulch. Smooth snow above treeline and good skiing conditions have brought many folks up onto the mountain. A handful of skiers descended from Redbanks yesterday. Snow conditions range from firm, frozen crust, wind packed powder, to smooth and creamy! Lower elevation crusts were sometimes breakable by a skier and sometimes not. Weak layers in the snowpack have varied from location to location. Most common has been failures at or near buried crust layers. However, a pit dug on an east facing aspect of Casaval Ridge yesterday yielded a 2-5 cm weak layer of graupel, about 30 - 40 cm deep. Stability tests showed moderate stability within this weak layer and full slope propagation not likely. (CT11-Q2/ECTN22-Q2) 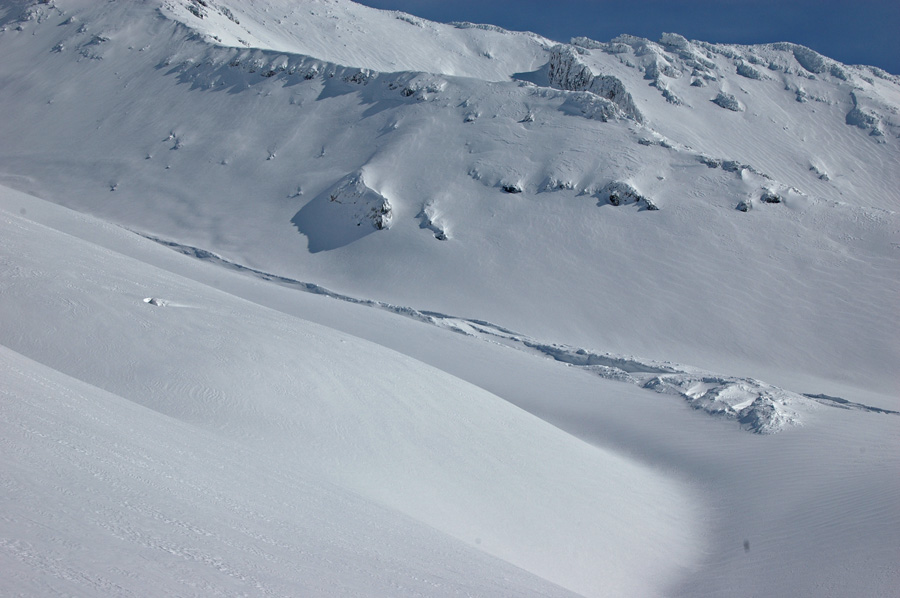 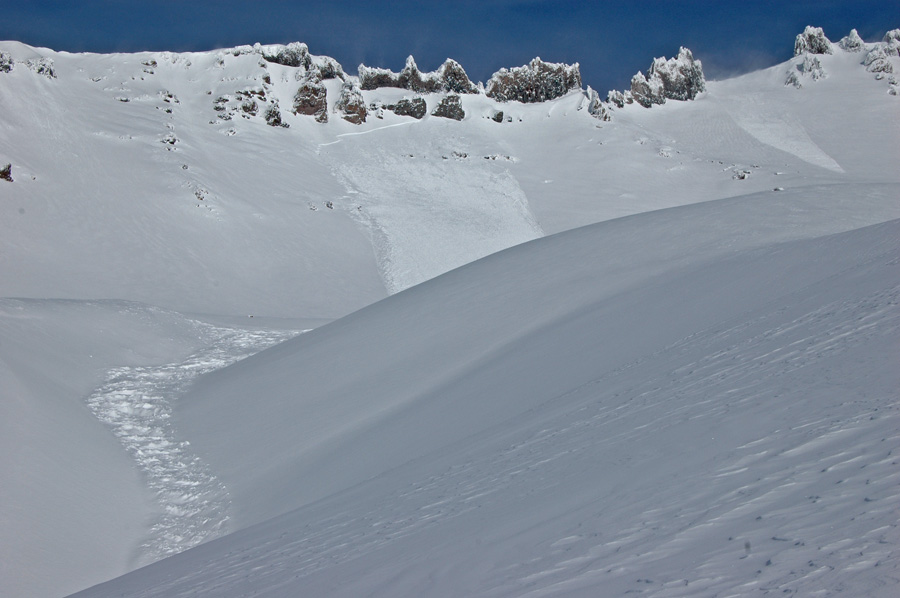 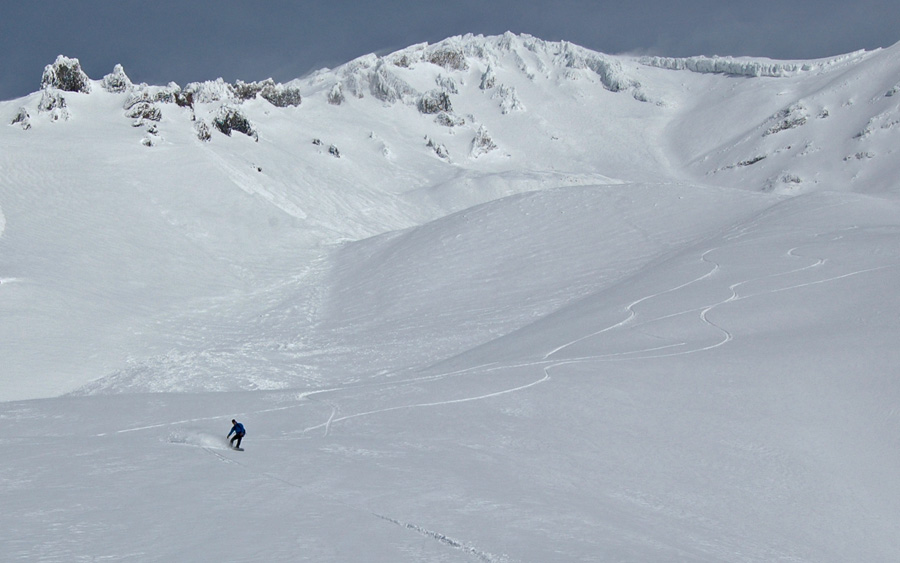 In Mt Shasta City this morning at 0500, we have rain falling with a current temperature of 46 F.

Old Ski Bowl - 7,600 feet. The Old Ski Bowl weather station has received no new snow in the last 24 hours. The current temperature is 33F with a low of 33F and a high of 52F. Total snow depth is 59 inches with no settlement since yesterday.

Castle Lake - 5,600 feet, the current temperature is 35F with a low of 34F and a high of 57F. Castle Lake has received no new snow and has a current snowpack of 3-4 inches with little settlement since yesterday.

Mt Eddy - 6,500 feet, the current temperature is 34F with a low of 32F and a high of 52F. Mt Eddy has received no new snow and hosts a current snow depth of 21 inches. Winds have averaged 2 mph with gusts to 12 mph, southerly in nature.

A wet and windy day today. Forecasts expect up to 1.24" of water for Mt Shasta by 10am Monday morning. One of the warmer storms we've had this year...snow levels are between 8,000 and 9,000 feet this morning and will gradually fall throughout the day to as low as 5,500 feet by Monday morning... a little late for consistent snow at all elevations on the mountain.  Steady westerly winds will be associated with this storm and blow 30-40 mph for today and switching to northwest on Monday, 35-45 mph.