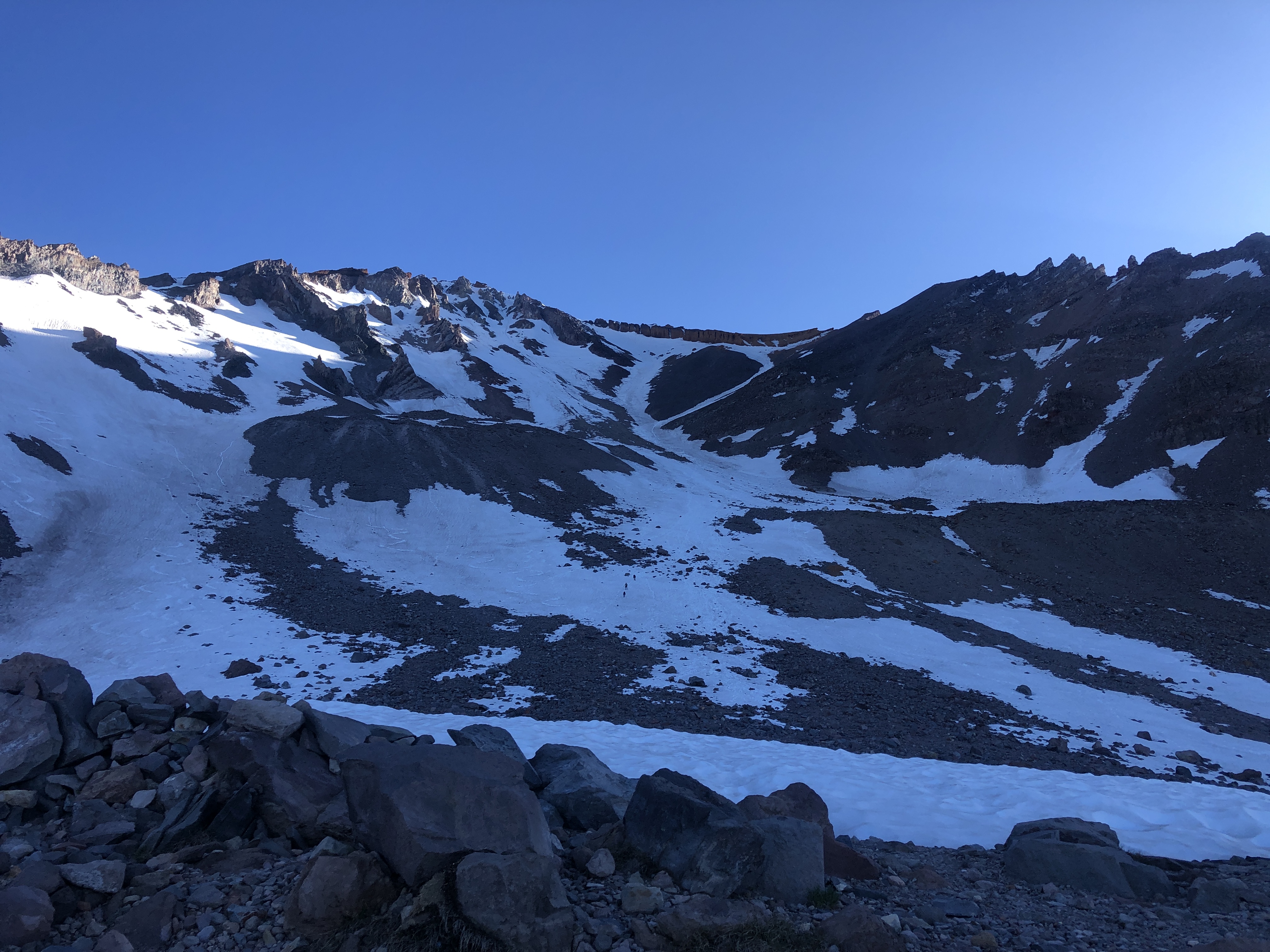 From town, it certainly looks like Avalanche Gulch is in its final days. Rather than speculate, I headed up the route on 7/2/22 to see just how much snow was left. I found the Gulch to still have consistent snow from above Lake Helen, through the Redbanks, and up to the base of Misery Hill. The snow is narrow in parts and melting quickly, but the route in terms of snow coverage is still good-to-go. How quickly that will change with another warm weather pattern next weekend is something to consider.

The trail from Bunny Flat to Lake Helen is snow-free. Do your best to stick on the marked trail to reduce erosion on the moraines. At Lake Helen, most are choosing to use camp sites on the moraines with rock wind barriers. There is still snow to use for melting water. Make sure to bring packout bags with you if you are camping at Lake Helen. Snow begins above Lake Helen and is consistent left and right of the Heart. This area is littered with rocks from rockfall later in the day. Use that as a reminder of rockfall hazard, stick to your turn-around-time and descend early. Most are still choosing to head right of the Heart and through the left-most Redbank chute. In this chute, there is consistent snow all the way through, including a patch of blue ice halfway up. The ice can be bypassed, but use caution; a slip here could have big consequences. Microspikes are not sufficient traction when this area is icy. The chutes in the Redbanks are narrow, watch for others below and above you when traveling through them. The potential for a bottleneck of people to form in these chutes is high. Above the Redbanks, there is consistent snow to the base of Misery Hill. Beyond Misery Hill, there is snow on the summit plateau. The final switchbacks to the summit have melted out significantly.

Once you reach the summit, you are only halfway done. Be careful on the descent. Watch for rockfall. As always, do NOT glissade above or in the Redbanks. Stick to a turn-around-time of 12-1pm. Have a means of navigation in the chance that weather or clouds blow in and visibilty is poor.

Avalanche Gulch is in late-season-condition, but it still contains consistent snow for climbing. With warm weather coming up, it may not last much longer than a week or two.