Overall, we have had a dry winter here on Mount Shasta, although since March 14 we have received over 24 inches of snow, including 6 inches in the last couple of days. Snow surfaces are variable above treeline. Expect some post-holing, soft snow, wind affected snow, and firm snow. Bunny Flat Trailhead remains open in limited capacity, though keep in mind that California is under a state-wide stay-at-home order. Outdoor recreation is allowed and only trailheads remain open. Maintain appropriate physical distances. More information about the closures here: https://www.shastaavalanche.org/announcements/covid-19

Our goal is to ensure you have a positive wilderness experience and come home in one piece! So,

Almost all the accidents on Mount Shasta result from:

With the right knowledge, skill, equipment, and decision making, all of these accidents can be easily prevented. Please, wear a helmet, and know how to use your ice axe and crampons any time of the year.

There is always potential for thunderstorm activity during the summer months that can shroud the mountain in clouds, limiting visibility. Climbers becoming disoriented on the upper mountain in whiteout conditions, and subsequently descending the wrong route is not uncommon. These kinds of scenarios have resulted in many searches over the years. It should go without saying, but we will say it as a solid reminder: Check the weather before you go and more importantly, monitor the weather as you climb. DO NOT CLIMB INTO A WHITEOUT! Being caught on the mountain in any type of weather can compromise life and limb.

Many hazards exist in mountain terrain. Some of these include:

Icefall and rockfall are possible year-round. It's a simple equation: as snow melts, rockfall increases. If rime ice is seen plastered to exposed rocks above, it will eventually flake off and fall onto climbers. Wear a helmet and keep your eyes up slope as you climb. Pay attention to other climbers: rockfall is often caused by climbers resting in melted out areas and accidentally dislodging rocks onto slopes and climbers below. Be careful not to kick rocks down onto others.

At a height of 14,179 feet, Mount Shasta is a high altitude peak. It is common for climbers to experience acute mountain sickness (AMS) with signs and symptoms of nausea, headache, and lightheadedness. Despite being a common condition, AMS should not be taken lightly. It can quickly develop into the much more serious, and potentially deadly pulmonary or cerebral edema. Stop and take a break. If symptoms do not improve, your only choice is to descend!

Mount Shasta is a 14, 179 foot volcano with steep slopes, avalanches, glaciers, rockfall, altitude, and extreme weather. Some may feel like Mount Shasta is "safe" due to it's proximity to Interstate 5 and it's "easy" climbing objective connotation. This is false. One should still expect cold, winter-like conditions at any time of year. Have the appropriate gear AND skill level. Mountaineering is dangerous and climbers must be able to constantly evaluate the terrain, weather, and many other factors in order to have a safe trip. One should also not expect immediate rescue. Many factors can prolong rescues. Thus, it is necessary, no matter what mountain of the world, that you be prepared.

Check the WEATHER FORECAST before coming up onto Mount Shasta! Our site's main menu hosts numerous resources on the weather. Researching the mountain weather should be an important part of your trip planning.

Clouds and Precipitation: While you may encounter fair weather at lower elevations, cloud caps can form up high. Never climb into a whiteout as many climbers have become lost or died in similar conditions. Many routes from all aspects of Mount Shasta converge on the upper mountain (>12,500 feet). During limited visibility conditions, climbers have descended the wrong side of the mountain. Keep an eye to the sky as you climb, turning around if clouds begin to build on or near the mountain.

Lightning: Mount Shasta is a 14,000 foot lightning rod and is frequently hit by lightning (usually in summer and fall months), so don't push your luck with building thunderheads.

Wind: Winds can reach over 100 mph at tree line (8,000 ft) and much higher in the alpine region. Winds of 40 mph can knock you off balance. Winds of 60-70 mph can force you to crawl. Hurricane strength winds (>74 mph) can make it nearly impossible to stand and will destroy well-anchored tents. The strongest winds occur with big pressure and temperature gradients in the atmosphere and tend to occur in front of, and behind storms. The lowest winds occur when the center of high pressure is over the Mount Shasta area. Take this seriously as wind has resulted in searches, injuries, and fatalities.

Climb early and descend early. This limits exposure to inclement weather (afternoon buildup of clouds is common), and allows plenty of time to descend before dark, and also allows a rescue effort to ensue before dark in the event one gets injured or lost.

Get an alpine start (2-5 am) and have a turn around time of 12 to 1 pm. Proper equipment, clothing, and training are a must. Helmets are recommended always and expect rock and ice fall at all times.

Bring extra warm gear (like a down jacket, balaclava, and extra gloves) in all seasons as climbers often develop superficial frostbite during strong winds. The wind chill temperature near the summit in winter and spring can be well below zero.

Anchor your tent well wherever you camp. Tents can and do blow away frequently. Do not plan to camp above treeline if you do not have anchor lines for your tent.

Solo climbing is not recommended. Traveling with an experienced group is a good idea, and remember - do not split up the group!

The routes on the north and east sides are not recommended for unguided novices; glacier travel and route finding skills are prerequisites.

Get avalanche training and know how to use your transceiver, shovel, and probe in the winter and spring.

Do not expect to be rescued. Rather, prevent rescues from happening in the first place, and be prepared to handle rescues within your climbing party should something happen. Nature sets its own terms and YOU must judge how much risk you are willing to accept.

The BEST time to climb Mount Shasta is usually from late May to mid-July on the south and west sides of the mountain when summer days are longer and the weather is generally stable. However, in dry years, the thin snowpack creates the best climbing conditions in April, May and early June. When the snow melts, you are left with 7,000 feet of scree, talus, and boulders. In heavy snow years, the climbing season extends to August or September. There is NO trail to the summit. Climbing is much safer and fun on consolidated snow.

A winter climb of Mount Shasta is possible, but it is more difficult and dangerous: extreme weather, short days, avalanches, falling ice and potential post-holing increase the difficulty and danger on all routes. If you choose to travel in the backcountry during the winter and spring, you need to have the proper equipment and training to stay safe. An avalanche beacon, shovel, and probe and the ability to identify avalanche terrain and snow stability are e. A climb of Shasta should not be taken lightly.

Every year, many climbers become lost, injured or killed while attempting Mount Shasta. Many of these accidents could have been prevented with a little bit of pre-planning and training. Full winter conditions exist currently and YOU need to come prepared.

Wilderness permits, summit passes, and pack-out bags are currently available at the Mount Shasta and McCloud Ranger Stations for self-issue and inside the buildings (maps available) during business hours. Packout bags are available at trailheads, but you must get your summit pass ($25) and wilderness permit from either ranger station. Annual passes ($30) are only available at the ranger stations and The Fifth Season in Mount Shasta. The Mount Shasta and McCloud Ranger Stations are open Monday through Friday from 8 to 4:30 PM. Check our climbing regulations for more details.

Using common sense and carrying the TEN essentials keep you and your party out of search and rescue statistics. Wear a helmet, and know how to use your ice axe and crampons. Be prepared and pay attention. The mountain has extreme weather changes.

Winter and Spring months usually see periods of heightened avalanche danger, though this danger could exist in the summer months under the right circumstances. Research the weather and avalanche danger while planning your trip. Have your climbing party bring avalanche beacons, probes, and shovels armed with proficient skills in their use. Know how to identify avalanche terrain and evaluate snowpack stability.

There are bathrooms at Horse Camp, but expect them to be closed in the winter and early spring. Water is available if the spring on Spring Hill is flowing. It won't be in the winter and early spring. It is recommended that Horse Camp visitors come prepared with their own water. The Horse Camp cabin and the surrounding property are owned and managed by the Sierra Club Foundation. The cabin is open year-round and all are welcome, however, one cannot sleep inside the cabin except in emergencies. Make sure you close the door when you leave. If you plan on camping at Horse Camp, a nominal $3 bivy/$5 tent fee is asked. Lastly, the Sierra Club Foundation manages its property under the Mount Shasta Wilderness rules - that means dogs are not allowed on their property either. Please respect the rules. Thanks!

DOGS ARE NOT ALLOWED IN THE MOUNT SHASTA WILDERNESS OR WITHIN THE SIERRA CLUB PROPERTY BOUNDARIES (HORSE CAMP). See map below. 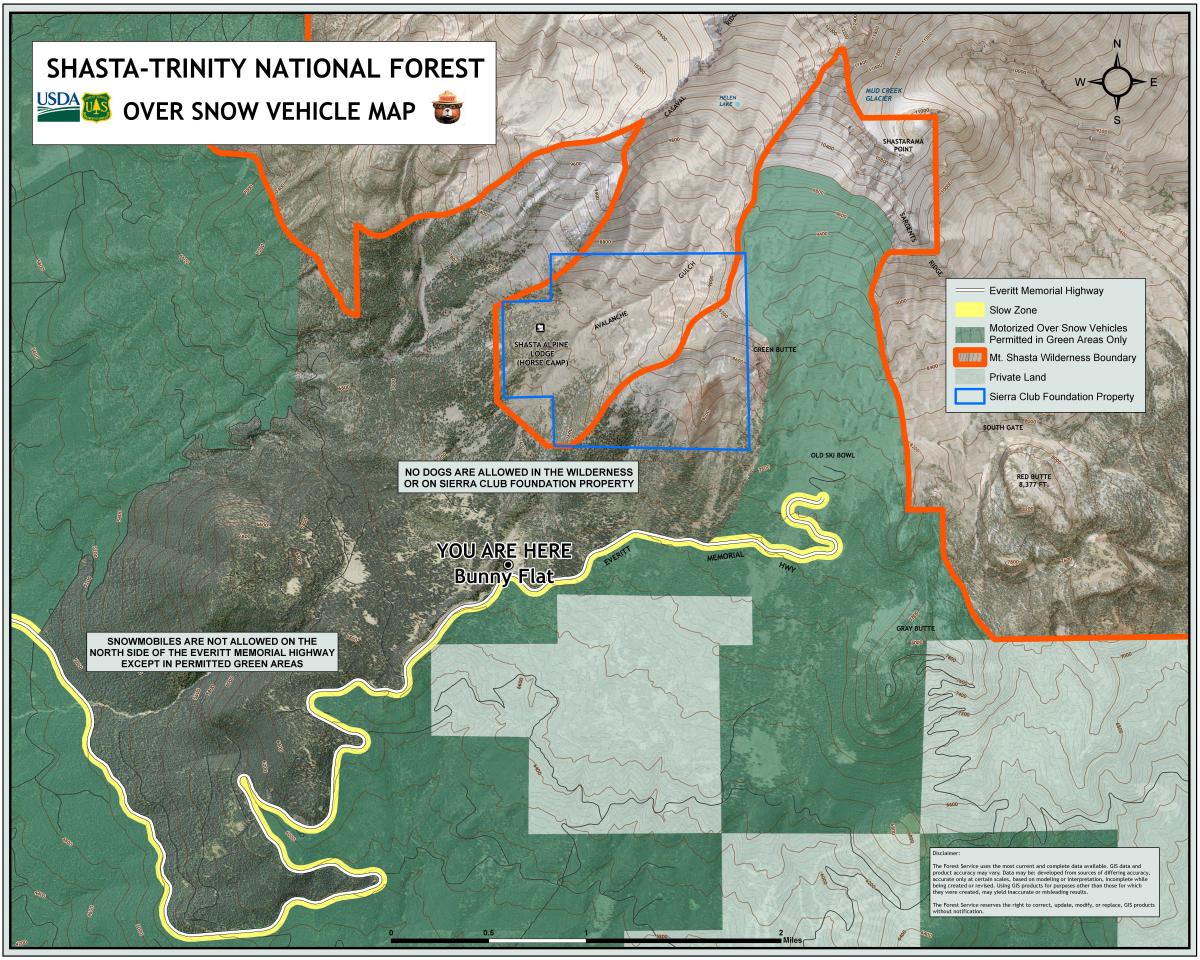