Below and Near Treeline on Mt Shasta 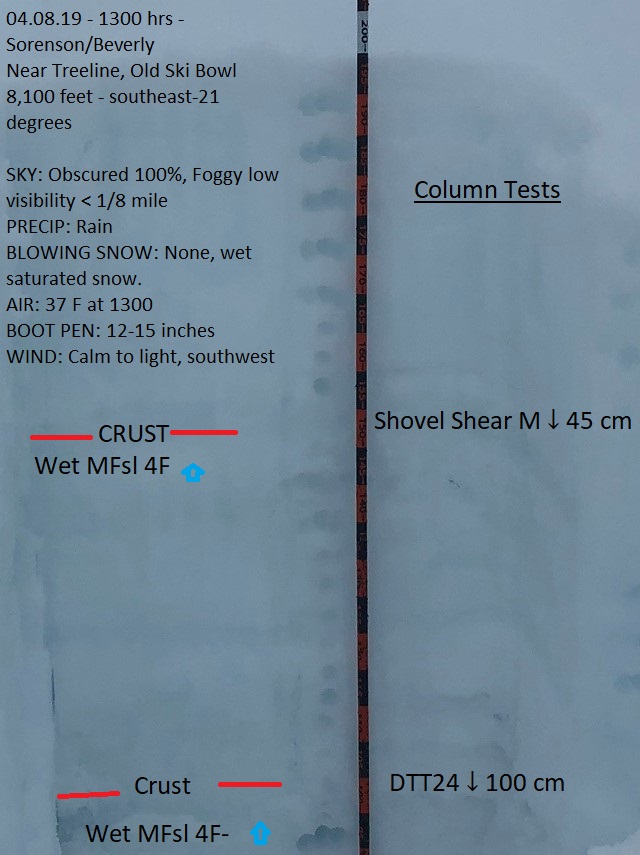 The recent storm to impact the Mount Shasta area has been warm, wet and rainy. Since it began early Saturday morning (04.06.2019) 3.83 inches of water has fallen as rain at 7,600 feet on Mount Shasta.  Above freezing temperatures have been recorded since noon on Saturday. An average temperature of 34 degrees F since midday on Saturday. This rain on snow has settled the snow nearly 10 inches over the last three days.

Digging a pit on an east facing aspect near treeline in Old Ski bowl found 17 inches (45 cm) of 4F to 1F hard wet snow over a pencil hard crust. A saturated slush layer was directly under the hard crust. No results were found in a compression test however, this layer showed some potential with a moderate shovel shear test result. Another layer with a similar crust with slushy saturated snow properties was observed at 39 inches deep. This lower layer showed planar results in a deep tap test (DTT 24 ↓ 100 cm). No instabilities or avalanches were observed or reported however, very low visibility has limited all observations.