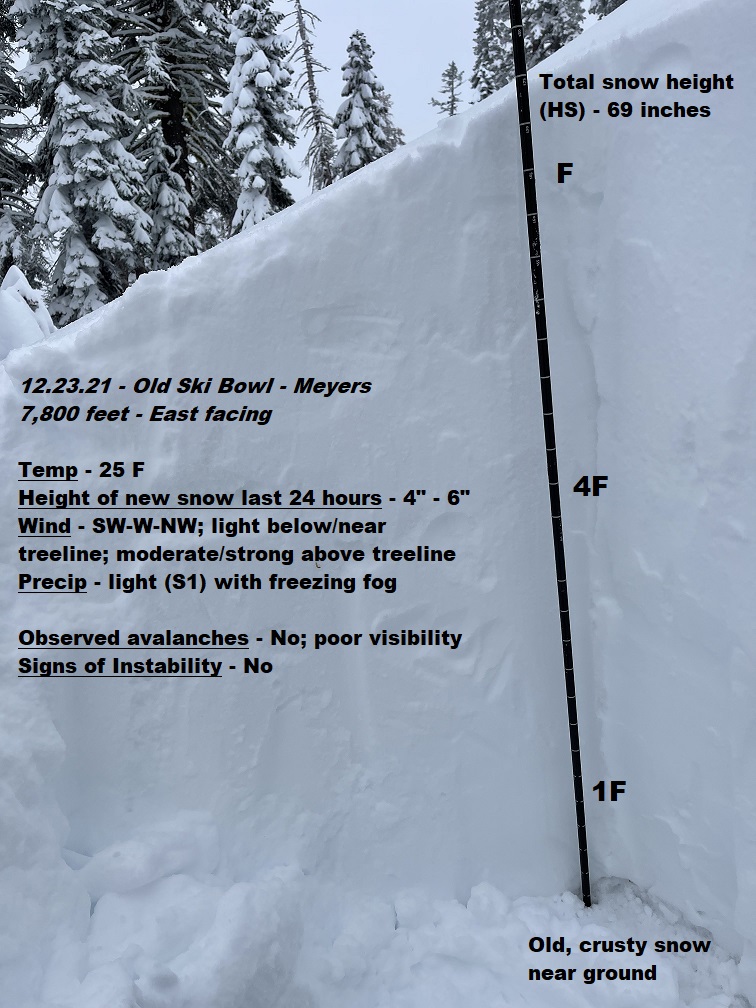 A motor tour from town to 8,500 feet in the Old Ski Bowl to access storm snow conditions and overall avalanche risk. Despite below freezing temperatures from all weather stations for the day, it was a wet, soggy and foggy one. We observed rain in town and it was barely snowing at 4,000 feet at 1430 hours. Snow level was about 4,500 to 5,000 feet. Freezing fog stuck to your goggles and froze immediately, making for difficult visibility. New snow totals over the last 24 hours observed about 4-6 inches above 6,500 feet, though over a foot of new snow has accumulated in the last 3 days. Overall, about 60-70 inches remains on the ground near treeline on Mt. Shasta.

Due to poor visibility, above treeline terrain was mostly inaccessible. We dug a pit near treeline on an easterly aspect, in an area with no wind effect. Moderate to hard, non-planar failures (ECTN22/CT15) were induced about 20 inches down from the surface, at a density change interface. This weak layer was stubborn to trigger.

Wind blowing snow was non-existent near and below treeline, however wind speeds recorded from Gray Butte weather station indicated otherwise, with steady SW-W-NW winds blowing for most of the day. Plenty of snow remains available for transport above treeline and this was likely the case up high.

Near and below treeline, the freezing fog has created a half inch zipper crust of sort with soft (fist hard) snow below. Overall, the snowpack soaked up the moisture laden atmosphere today and while some dryer snow can be found at upper elevations, lower elevations is mashed tater-like.