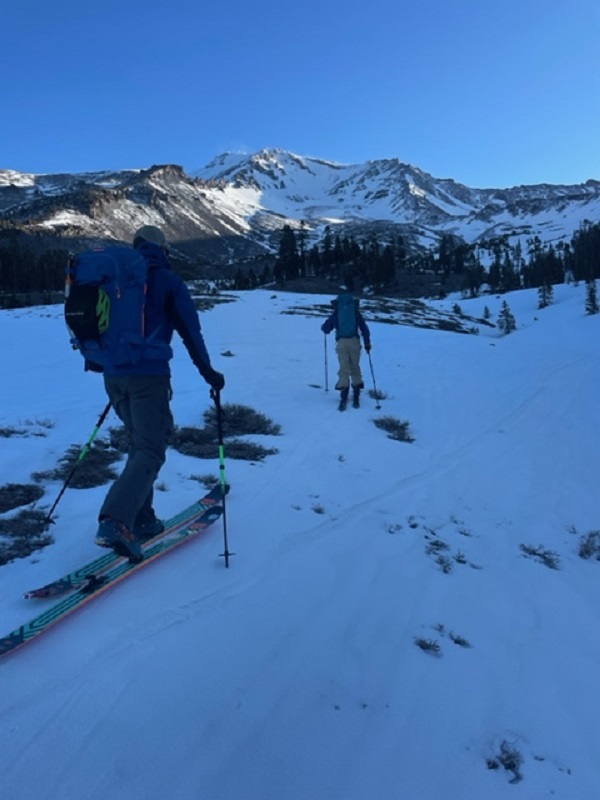 Report from a climber/skier this week of March 28 :

Got up and skied the West Face on Tuesday (29th). Top 500' were locked up, but had pretty excellent turns below that- a combination of corn, the new snow from Monday slightly warmed and softened, and some transitional snow. New snow amounts ranged from a trace above 7500 ft to maybe 2 inches up high. Had some strong winds on the plateau, but very mild everywhere else. We climbed Avalanche Gulch and had zero rockfall, even though we left Bunny Flat at 7:15- got to The Thumb by about 1100 hrs. The pitch at the top of the Konwakiton is very steep right now, and would involve some very steep side-hilling to get to above to short hill. Much easier to go direct through the Red Banks. We traversed off the West Face at about 10,400ft, and sidehilled across the ridges, including some dry sections, and eventually linked into Giddy Giddy about 1/3 way down. We were able to ski that to the flat section at the bottom, then had to walk on dirt down the very base of the steep, south facing slope above Horse Camp. From there, we picked up the trail and skied to about a mile from the car (near the intersection with Sand Flat). On the way up, we walked on dirt for about a mile, then skinned up skier's gully quite easily all the way to the last moraine. Overall, a surprisingly excellent day out. Trinity Chutes and Left of Heart both looked to be quality skiing as well. Very little rime on anything up there. - M Galgay